by Michael A. Jones
Change.org 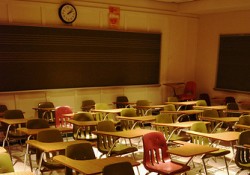 It’s scary to think that a person who believes gay kids deserve suicide has a position of power within a school district. But sure enough, Clint McCance is a school board member at Midland School District in Arkansas. And he has some absolutely troubling and disturbing views when it comes to homosexuality, according to HRC Backstory.

McCance took to his Facebook page last week, to blast what became known as Spirit Day, a day where all around the country, people wore the color purple to remember those LGBT students who were victims of bullying or suicide. For McCance, this was nothing more than a day of honoring “sin.”

“Seriously they want me to wear purple because five queers committed suicide. The only way I’m wearin’ it for them is if they all commit suicide,” McCance said, in one of the most ugly outbursts in recent memory. “I can’t believe the people of this world have gotten this stupid. We are honoring the fact that they sinned and killed themselves because of their sin.”

It merits repeating once again that McCance, as a school board member in the Midland School District, is in a position of power where he helps set the education policy for students in the district. It should be more than alarming to administrators that McCance took to his Facebook page to suggest that all gay kids should commit suicide.

But alas, McCance didn’t stop there. He started to engage his Facebook followers with even more homophobic rhetoric.

“Being a fag doesn’t give you the right to ruin the rest of our lives. If you get easily offended by being called a fag then don’t tell anyone you are a fag. Keep that shit to yourself,” McCance wrote. “It pisses me off though that we make a special purple fag day for them. I like that fags cant procreate. I also enjoy the fact that they often give each other aids and die.”

Let’s repeat this once again: this is a school board member. Someone charged with upholding the Midland School District’s mission of “making a difference” in the lives of students. And his reaction to the recent spate of anti-gay bullying and LGBT students who have committed suicide? To release a diatribe so vile, it makes the Westboro Baptist Church look like Miss Manners.

Please take action and let the Midland School District know that this kind of language from a school board member is exactly the reason we live in a country where schools are toxic for LGBT students. This simply can’t be excusable.

A Facebook page calling for McCance to be fired has already attracted 1,100 members (and growing), and today the Human Rights Campaign’s President, Joe Solmonese, released a powerful statement about the negative effect rhetoric like McCance’s has on all students, gay and straight alike.

“Clint McCance has put a face on the hate that devastates our young people,” said Solmonese. “McCance and his hate shouldn’t be allowed near children, let alone managing their education.  We call for his immediate resignation from the school board.”

Echo their call by writing to the Midland School Board today. I’m reminded of a post earlier today that talked about a Texas Pastor who said it was a moral imperative to condemn gay bullying. His words? “Too often, moderate voices sideline themselves, not wanting to rock the boat. The recent epidemic of bullying-related teen suicides is a wake-up call.”

Indeed it is … a wake-up call to all of us that regardless of our politics, language like this from a school official shouldn’t be tolerated.

Thank You from Wild Pug

‘Safe Schools For All’ launches to help students take action against…