Illinois EagleCentral Illinois\' LGBTQ online newspaper
Facebook
Twitter
Pinterest
WhatsApp
Destination of the Day: Woodstock Opera House, Woodstock, IL (McHenry County)
Woodstock is one of those dream small towns – a busy downtown district, a train station, a town square, and this well-maintained and active masterpiece. According to its web site the opera house was built in 1889 to house the library, council room, justice court, AND fire department. Now it is the home theatre for five companies, including the Woodstock Mozart Festival, plus a small cafe. March events include performances of The Importance of Being Earnest, Michael Drew, and for one night Ed Asner as FDR. While maybe not a top getaway destination, the city does offer a few hotels and B&Bs near the METRA station, including the Royal Victorian Manor which was used in the film “Groundhog Day”.
Address:
Woodstock Opera House
http://www.woodstockoperahouse.com
121 W Van Buren Street
Woodstock IL 60098
Getting There:
Public Transit-
METRA:
http://metrarail.com
-Use METRA’s Union Pacific/Northwest Line to Woodstock station
-Walk south on Wheeler Street to theatre
Auto-
-Take I-90/Rt. 41 to Route 47
-Continue north to Woodstock 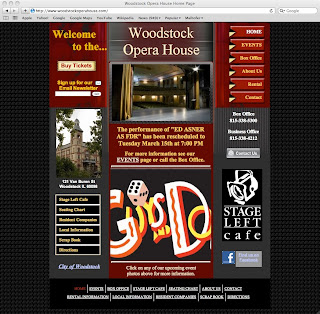