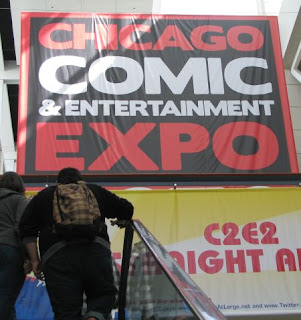 Story and photos by Tom Wray

We’re gonna take a break from politics and travel for a little bit. Along with being liberal and gay, the publisher happens to be a bit of a geek. Okay, he was lucky to keep in the squees as he attended the Chicago Comic & Entertainment Expo today at Chicago’s McCormick Center. As a perk, this was the first time I’ve actually attended a sci fi con.

I’ve been to conventions before, at the same location. However, then I was working for a trade magazine and trying to learn about new meat processing technologies. It’s a bit different. One, I could actually wear sneakers and no tie. Two, there seemed to be a lot more Imperial Troopers around.

It’s by no means the only con in the Chicago area (Chicago Tardis for Dr. Who fans is later this year), but it is probably the most broadly based. There were comics, gaming, webcomics, screenings, panels, cosplay (people come as their favorite characters) and on and on. I had a special goal to come since two of my favorite webcomic artists were going to be here: Joel Watson of HijinksEnsue and Danielle Corsetto of Girls With Slingshots. Considering they hail from Dallas and Maryland respectively, I’m appreciative of the effort.
﻿

﻿﻿HE is the more strictly geek strip, with a special love of anything Joss Whedon does. The strip is in fact the first webcomic I started reading on a regular basis. He seemed okay taking the blame for staring my addiction. And the strip even has a bit of gay credit since the character of Josh (based on a real-life friend of the same name) is gay. Joel did a sketch of Jayne from Firefly for me making out with his gun. And I mean actual gun. He named it Vera. Afterwards I realized I should have asked if he could do one of Josh making out with Jayne. Next year.

GWS has a storyline but still has some fun geekiness to it. It has a nicely full cast of great characters. She offered to do a sketch of a character from the strip. I immediately asked for Jamie, my favorite. She’s all sorts of bubbly with superpowered breasts (they are magnificent, and I say that as a gay man). She also has a lot of fun deflating the other main character Hazel who happens to be an unemployed writer like me.

They, along with a panel with Sam Trammel (Sam Merlotte), Kristen Bauer (Pam) and Britt Morgan (Debbie Pelt) from HBO’s TrueBlood were definitely the highlights of the day, but the whole event was fun. After being directed by my friend Ethan, I was also able to find Prism Comics, an organization for LGBT comic writers, illustrators and readers and has a pretty sizable stable of artists in the Chicago area.

More photos below the fold.