By Illinois Eagle Staff On Apr 7, 2011
120
Share
Destination of the Day: US Cellular Field, Chicago-Armour Square, IL (Chicago)
Opening Day is 7 April against the Tampa Bay Rays. This 40,615 seat stadium was one first baseball stadiums to return to an open-air and traditional style after the previous wave of multi-sport complexes, and it shows. Since it opened in 1991 the complex has been altered several times with the biggest being the removal of a few thousand seats on the top deck. Located in Chicago’s Armour Square Square (although nearly everyone calls the area by the nearby community’s name of Bridgeport) the stadium is still surrounded by surface parking lots giving it an isolated feel from the bustling neighborhoods just beyond the lots. For the CTer, public transportation options include the CTA Red Line 35th Street Station, CTA Green Line 35-Bronzeville-IIT Station, and new this year, METRA Rock Island Line Jones/Bronzeville Station.
For more information visit its Wikipedia entry at http://en.wikipedia.org/wiki/U.S._Cellular_Field
Address:
U.S. Cellular Field
http://chicago.whitesox.mlb.com/cws/ballpark/index.jsp
333 West 35th Street
Chicago, IL 60616
866-SOX-GAME (for baseball tickets)
Getting There:
Public Transit (always confirm schedules)-
-CTA Red Line and Green Line both offer stops east of the stadium
-METRA Rock Island Line Jones/Bronzeville Station is now open and is also east of the stadium
Auto (always confirm route)-
-Take I-90/94 to the West 35th Street exit (Exit 55 or Exit 53, expending on direction)
-Follow to stadium (again, depending on direction from expressway) 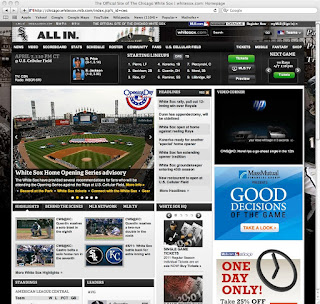