WOW! LOTS GOING ON THIS WEEK

Okay, first up:
TODAY: IN STORE NEWER COMICS SALE. Didn’t try DC’s NEW 52, now you can do it on the cheap! Newer comics are $2 bucks a pop at all Graham Crackers Comics locations starting today through Saturday. Then come Sunday whatever is left is only $1 buck! It’s going to be crazy at the shops these next 4 days!

WED. FEB 15th – also known as NEW COMICS DAY, we’ll be hosting a signing with WALKING DEAD author Jay Bonansinga at our LOOP store from Noon to 2pm. Meet him and get a copy of his book personalized to you!

TIME TO COSPLAY – want to go to C2E2 for FREE? We’re giving away 18 WEEKEND PASSES (a $900 value) on Wed. the 15th as well. Be the first 2 customers to show up in costume starting at 4pm next Wednesday and grab yourself a FREE WEEKEND PASS to CHICAGOs C2E2 COMIC CONVENTION April 13-15th! 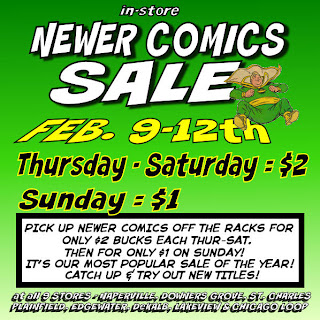 Graham Crackers Comics is proud to be partnering with Chicagolands own Pro Wrestling Blitz! Yeah I know what you’re thinking.. “Hey aren’t you guys are comics store, what’s with the wrestling!” Just stop right there. We all know you guys love wrestling! So why not check out some of the best the Chi-Town area has to offer?
Held at St. Joseph Park at 700 Theodore St. in Joliet, IL.

I was in attendance at last months Unfinished Business IV and had a blast! The promotion put on a fantastic show that pretty much had something for every wrestling fan. From loud mouth mangers to classic good guys to a hardcore barbwire match! It’s all you want in a night of wrestling entertainment! Again I can hear some of you now “I heard that Indy shows suck and are (fill in the blank)” Well they got you covered there to! With a video screen that shows the wrestler’s entrances and a live band at each show its way better than that stuff on Monday night. Plus you never know who may show up! Last time it was former ECW/WWE star Rhino who surprised the crowd! All that and family friendly to! (Just so you know Family Friendly doesn’t mean boring.. did you forget I said the last show had a barbed wire/fans bring the weapons match!) So where can I get more info on this promotion you must be asking yourself now! Well right here at the Pro Wrestling Blitz website http://www.prowrestlingblitz.com/home.php.

The next show is “Night of Heartache” on 2/25/12 with Al Snow and Honky Tonk Man on the card!  Plus could the greatest Intercontinental Champion of all time be making an appearance at a Graham Crackers location???? Stay Tuned next week for more information!

What happens if Roe v. Wade is overturned? LGBTQ+ legal experts are worried about…

Is medication abortion an ‘existential threat’ to abortion restrictions?

HIV preventive care is supposed to be free in the US. So, why are some patients still…