George R.R. Washington Presents A Game of Groans at Quimby’s Bookstore on March 27

A GAME OF GROANS
A Sonnet of Slush and Soot By George R.R. Washington 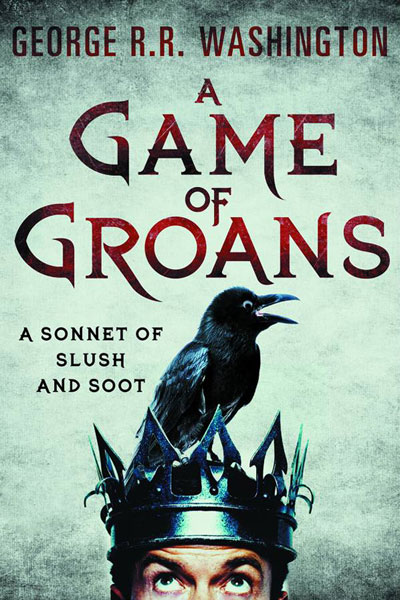 It’s the story fans of George R.R. Martin’s series A Song of Fire and Ice know and love—well, sort of. In the wayward world of GEORGE R.R. WASHINGTON’s A GAME OF GROANS: A Sonnet of Slush and Soot (Thomas Dunne Books/St. Martin’s Griffin; 1-250-01126-4; March 27, 2012; Trade Paperback Original; $9.99) seasons can last decades. And trouble is brewing. The warmth is returning, and in the thawing tundra of the North of Summerseve, something wicked is coming. A GAME OF GROANS is the story of the Barkers of Summerseve, headed by Lord Headcase Barker and Lady Gateway Bully Barker, and their children including Allbran, Bobb, Malia, Sasha, and of course, bastard Juan Nieve (all followed by their pet direpandas, natch).

The Barkers are a family unit as hard and unforgiving as the pronunciation of “Daenerys Targaryen” and nothing will be the same after a visit from King Bobbert Baronme and the royal family. Swooping from this land of sweater weather to a balmy kingdom of equestrian delights and outdoor fornication, here is an epic of novella proportions. Amid plots and counterplots, wizards and warriors, poor reception and no wireless, the future of the Barkers, their BFFs, and their enemies dangles in the balance, as each strives to star in that funniest of concepts: a parody of George R.R. Martin’s A Game of Thrones

GEORGE R.R. WASHINGTON is the author of many novels. As a writer-producer, he has worked on The Outer Limits, Teen Wolf, and many other films and pilots that are currently stored in the Yucca Mountain Nuclear Waste Repository. He lives with the lovely Natalie in Chicago, Illinois.