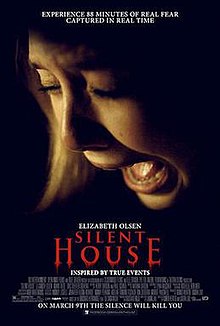 The beginning part of Silent House does what a scary movie should do: make you too scared to eat your popcorn. The end of the movie, that’s when you can finish your snacks.
It follows Sarah (Elizabeth Olsen) and her father John (Adam Trese) while they stay at their lake house and restore it in hopes to sell it in the future. The creepy old house has no power, the windows are boarded up and doors are locked. Olsen clenches to her lantern, her only source of light, as we experience in real-time right along with her frightening events that terrorize her and her father.

Along for the ride is Sarah’s uncle Peter (Eric Sheffer Stevens) who is just as concerned as his niece and brother, Sarah’s father. The three hear and see eerie things that make them believe, they are not alone. Even a strange visitor comes to the door; a neighbor named Sophia (Julia Taylor Ross) who sees Sarah and hugs her while Sarah has no idea who she is. Sophia says the two used to play together when they were younger. Sarah looks a little concerned and confused, making us point fingers already.

I must say that Olsen’s performance was notable. Although, it wouldn’t be a horror flick if she didn’t run around in a white low-cut shirt or run back into the house when she is already outside but she did steal the movie. And I say that mostly because it’s just her on screen but her intense fear and terrified faces makes us feel like we are running through the house with her. Directors Chris Kentis and Laura Lau (Open Water) have cameras follow Olsen for 90 minutes in a single shot with no obvious cuts. Its delivery method makes it even creepier. It is based on the Uruguayan-Spanish film La Casa Muda, directed by Gustavo Hernández, released in 2010.

It is not unnecessarily gory since most of it is Olsen trying to get out, hiding under furniture or tiptoeing around the house, which will leave viewers glued to the screen. But there lies a problem. At times, it felt like the camera was just chasing her as she hid under the chair, or the kitchen table. A little more scares, a little more plot would have been nice. Nonetheless, you will jump and be at the edge of your seat… but just for the first hour.

The ending is disappointing and confusing to say the least. I won’t reveal the ending, but you’ll be just as frustrated as everyone else who has seen it. The twist was unexpected and done before in horror movies. This feeling of excitement and curiosity of what could possibly be the conclusion of this creepy story I had flowing through my nervous body came to a halt when the truth of the events was revealed. I certainly wasn’t silent as I was leaving the theater.

OCRAC to host “Better Days Ahead: A Cultural Tribute To the Memory of Troy Davis and Martina Correia,” March 23rd

Book Review: The Girl from the Sea