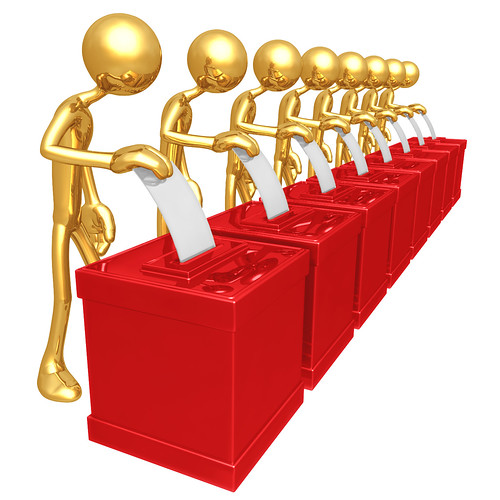 The Illinois primary on Tuesday saw Mitt Romney in the winner’s circle with 430,744 votes.
But the results may have either little or large effects on the Republican presidential nomination as a whole. However, it is still too early to tell whether the Illinois primary had any effect.
Jim Allen, the spokesman for the Chicago Election Board said, “We [had] an exceptionally low turnout.
“I think that it is a reflection of the fact that there is no high profile contest on the Democratic side of the ballot in terms of a statewide contest and in terms of a presidential contest—the incumbent Democratic president. 90 percent of voters in Chicago polled Democratic ballots.” The president has no opposition at all as well, said Allen.
The Cook County Clerks office released a press release that offered a few highlights about the election in regards to suburban Cook County.  The press release stated that 53 percent of voters cast Democratic ballots while 46 percent cast Republican ballots. Wheeling Township cast the highest number of Republican votes with 14,579. These results will be updated however when more mail-in ballots are processed.
According to the press release, as well, the turnout for suburban Cook County was down from the presidential primary in 2008.
Ken Menzel, the deputy general counsel for the Illinois State Board of Elections, said via email “the reasons people don’t vote are as varied as the million nonparticipating registered voters.”

“In this particular election one factor [for the low turnout of voters] was likely that the Democratic Party had an unopposed candidate for president and did not have a lot of hotly contested lower offices that generated widespread publicity,” said Menzel. “But many other things certainly factor in with different people.”

However, even with the low number of voters who went to the polls the election was “remarkable smooth,” said Menzel. The only real problem that happened during the primary was in regards to the “too wide,” ballots where in some counties the ballot was too wide to fit in the counting machines.
Chicago specifically, is considered to be a high Democratic area and so unless a person was affiliated with the Republican Party, voting on Tuesday wasn’t that important.
Allen said, “It is apparent from the numbers and looking at it that this does not get the electorate excited like a contested statewide contest or rather a competitive statewide contest at the top of the ballot. Where the candidates are debating issues and records and everything else.”
Illinois has in the past couple elections leaned “Democratic, however, this is certainly not uniform across the various parts of the state,” said Menzel.
And although the Democratic side does not have a high-profile competition that doesn’t mean there isn’t something to look out for during the primaries and caucuses coming.
“On the Republican side there is a spirited contest for president but again [there is a] relatively small number of voters in the city of Chicago [that] have tended to poll Republican. It is not going to have [the] impact in Chicago that it might have in DuPage County,” said Allen
According to a Chicago Tribune article, six times in the past 36 years the Illinois primary determined a presidential nomination.
“On the Republican Party side [the primary] may [have an effect on the presidential nomination]. It appears that one candidate captured a large majority of the elected delegates from Illinois,” said Menzel. “Although all of the candidates still have a significant way to go in getting the necessary delegate count to secure the nomination.”