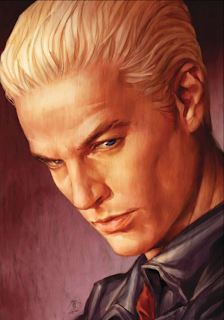 Dark Horse Comics announces a brand-new Spike miniseries slated for release this summer!
Written by Victor Gischler (X-Men, Deadpool: Merc with a Mouth) and drawn by Paul Lee (Buffy the Vampire Slayer, The Devil’s Footprints), Spike promises to be the series all Joss Whedon fans will be talking about.
Spike ventures off world in his bug ship in order to get away from some personal frustration on terra firma, and winds up sucked into a demonic plot to take advantage of the absence of magic on earth.
“What I love about working with Dark Horse on Buffy-related material is that they take great care to capture the feel of the characters and stories from the television show, of which I was a huge fan. Getting my hands on the characters I’ve loved so much over the years is a dream come true,” said Gischler.
Spike #1 will be on sale August 22, 2012!