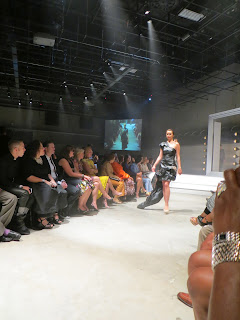 As the weather heats up, colorful and sexy clothing can be seen on men and women everywhere. The sun shines, the pools are filled and shopping in the city becomes the only worthy pastime. The summertime also means school is over. For the men and women of Columbia College Chicago, it’s the best time of the year.
For years, graduating students in the fashion program show their best pieces on real models, on a real runway, at a real fashion show. Fashion Columbia 2012 was held Friday, June 8th at 7:00 p.m. I was there, front row, and in awe of the garments I saw.
It was the first year I ever attended and I was very impressed by the whole evening. I bought the VIP pass because it seemed like the only way to go if you’re attending a fashion show. And I was so right. 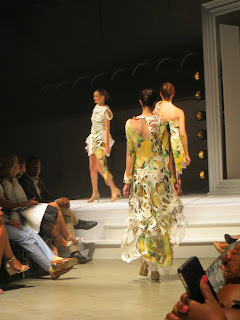 I waltzed into a modern-looking Columbia building in my white wedge heels and pink dress with black and white detailed designs. And right in front of me was a red carpet. Yeah, you heard me. There was a red carpet. I’ve never felt like a celebrity in my life but when I walked down it to where a photographer asked me to pose and took snapshots of me and what I was wearing, I felt Oscar-like. The only thing missing was E! and Nicole Kidman next to me.
I walked to the end of the red carpet into the VIP tent outside in back of the building. Swarms of groups of delicious men and beautiful women chatted with their drinks before show time. I stood by the open bar with my champagne and watched. I saw sexy stilettos and cute summery sandals, gorgeous evening dresses and skirts, colorful tight day wear and perfect men’s suites and ties.
I picked at almost all the yummy finger foods that the waiters were walking around with. It was very fancy with all the lovely people and large arrangements of flowers and candles lit everywhere. 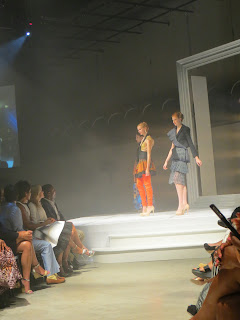 After we all indulged, it was time for the fashion show. Men and women who are recent grads of Columbia had their models walk down the runway in their three best designs. The colors and fabrics were fantastic and the styles were dazzling. It was like seeing a New York fashion show. Impressed is an understatement. The designers even went all out with their model’s accessories. Big hair, in-your-face costume jewelry and extravagant hats. After the show, the underground after party began with bite-sized desserts, more drinks, and the opportunity to mingle with the student designers.
If I could reserve my tickets for Fashion Columbia 2013, I would. In the meantime, interested in some more Columbia fashion events? Ending August 1, LAUNCH, an event that captures student work and other fashion projects is being held at 33 E. Congress in downtown Chicago. 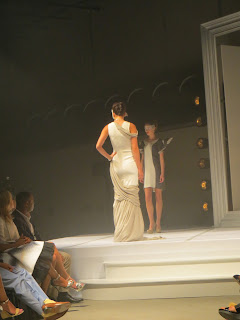