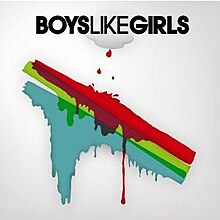 The other day I was on my usual music fix at a Best Buy when I noticed Boys Like Girls self-titled debut album in the bargain bin. Immediately it took me back several years. As I recall I was in high school when it released in 2006.
It took only a simple run through for me to remember why it was such an amazing record. The continuous pulsing of pop/alternative rock controls the head-bop in and out of each song. It is rare to find an album that completely engrosses a vast amount of emotions throughout and until conclusion.
It begins with “The Great Escape,” a fast paced race through a final night of farewells and adolescent angst leaving melancholy thoughts for a later time. Then it bleeds into an immediate introduction of “Five Minutes to Midnight” a song that starts with an easy-going guitar melody and traces its way through jolting lyrical lines. “Hero/Heroine” plays out the role of an unstoppable love. The fifth song on the album “Thunder” is the anthem of a summer lust – the line “Your voice was the soundtrack of my summer” explains it all, combining amateur fantasy with critical reality. The 10thsong is “Heels Over Head” another running love song consisting of smooth words and rigid guitar spurts. It takes sudden heartbreak and ghostly memories to the pop level. A track that no doubt became a song used to brand exes.
I find it hard to discover a debut album that is so fun and relatable. The timing of my nostalgic music taste could not have come at a better time. After releasing their sophomore album, Love Drunk, (2009) the members took a short hiatus, which accompanied losing their bassist Bryan Donahue (due to side projects).
The band recently released an EP titled Crazy World, on July 17, 2012, to promote their third studio album. The full-length album Crazy World is planned to release this fall. It seems to me that sometimes a band can release an epic album and never be known for anything else. They’ve had hit singles before and yet they continue to keep popularity. I don’t see why they couldn’t do it again.  Stay Tuned…