Intersex Justice Project co-founder Saifa Wall leads the crowd in a chant outside of the Societies for Pediatric Urologists conference in Chicago. (Photo by Michelle Zacarias / People's World)

Intersex Justice Project co-founder Saifa Wall leads the crowd in a chant outside of the Societies for Pediatric Urologists conference in Chicago. (Photo by Michelle Zacarias / People’s World)

CHICAGO—Intersex activists and allies gathered last week outside of the Marriott Marquis hotel to protest the continued performance of medically unnecessary genital “normalizing” surgery on intersex infants. The demonstration was coordinated by Pidgeon Pagonis and Saifa Wall, co-founders of the Intersex Justice Project (IJP). The action targeted the Societies for Pediatric Urology, which held its annual meeting here last Friday.

The Chicago-based protest is one of many growing conversations around the country regarding the ethics of intersex healthcare. Many advocates have condemned the surgeries being performed on intersex youths, which are often framed as “necessary” but cause irreversible bodily damage. The IJP is now demanding that hospitals halt these procedures, calling them “medically sanctioned violence and torture.” 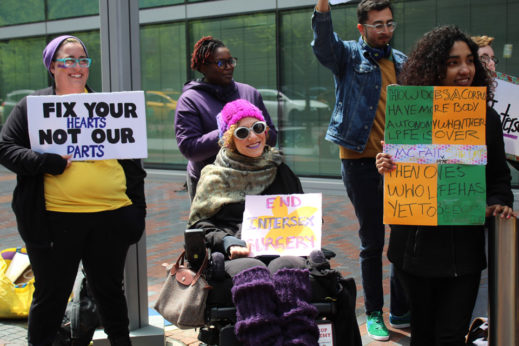 Demonstrators gather in support of the Intersex Justice Project, holding signs that say “Fix your hearts, not our parts” and “End Intersex Surgery.” (Photo by Michelle Zacarias / People’s World)

Intersex is an umbrella term used to describe a wide range of natural variations in sex characteristics that do not seem to fit typical binary notions of male or female bodies. Despite there being a common narrative around intersex people as being a“medical anomaly,” approximately 0.5%-1.7% of the human population is born with intersex traits, a statistic comparable to the number of people born with red hair.

Although there may be an even larger intersex community, there are currently few ways of keeping formal tabs outside of hospital records. There is a lack of institutionalized acknowledgment of intersex people, in addition to the internalized stigma of being intersex. “As children, there is an immense amount of shame that you learn to absorb,” says Pidgeon Pagonis, a filmmaker and intersex educator, “simply based on how people treat you around the private parts.”

Pagonis (who goes by they/them pronouns) was diagnosed with androgen insensitivity syndrome by doctors at Lurie Children’s Hospital of Chicago (formerly known as the Children’s Memorial Hospital). At just six-months-old, hospital staff performed an operation to remove their internal testes. The procedures did not stop there: Several years later, when Pagonis was four-years-old, the hospital performed a clitorectomy, and then a vaginoplasty when they were eleven.

These surgeries were all conducted under misleading pretenses. The hospital staff painted a false narrative to Pagonis’s parents, claiming that they ran the “risk of having cancer” and implying that the procedures would have little effect on Pagonis in the long-term. It wasn’t until they were 19 and a freshman in college that Pagonis was able to review their medical records and discovered they were intersex.

Pagonis’s experiences laid the groundwork for the intersex activism and education they currently do. The Intersex Justice Project was co-founded by Pagonis and Wall in 2016. At the time, there was less public information being shared about the harmful practices of the medical industry against intersex children. Wall told People’s World that the creation of the collective came out of a desire to center Black and brown intersex communities. “As someone who is an older queer—I’m 40 years old—I know that people of color are often overshadowed and overlooked in the movement.”

Similar to Pagonis, Wall also faced many of his own struggles being intersex in the healthcare system. Born and raised in New York City, Wall was one of five children and later discovered that he wasn’t the only intersex person in his family. The feelings of isolation from not knowing other intersex people, or even what that meant growing up, led him to help create IJP. “Being Black, being from the Bronx, being working class, that shaped my investment in this work.”

The action against the Societies for Pediatric Urology in Chicago was a strategic part of the IJP campaign to hold healthcare professionals accountable. In many cases, a vast majority of intersex children are born healthy but are often still forced to conform to society’s aesthetic of “normative” genitals, stripping away bodily autonomy at an early age. “This is a way to bring attention to the fact that these surgeries are still happening,” says Wall. “Doctors are acting without impunity, and they are not being transparent.”

In response to the ongoing protests around the nation, the Societies of Pediatric Urologists hired a public relations firm to address the backlash they’ve been receiving. They hired Levick Communications, the same PR group that the Catholic Church picked to handle its sex abuse scandal “We find this important to point out because the violations experienced by intersex children leave intersex adults with similar side effects shared by adults who’ve experienced childhood sexual assault,” says Pagonis.

The conversation around intersex justice has more recently picked up in the media because of the continued efforts from community organizers to push for legislative intervention. In February, California lawmakers introduced a bill that would consider banning cosmetic genital surgery on intersex children. However, in early April, California Sen. Scott Wiener, D-San Francisco, announced that he would pull the bill from this legislative session and delay it until 2020 in order “to see if consensus could be reached between the bill’s supporters and medical associations.”

In the meantime, IJP hopes to continue uplifting intersex communities challenging the destructive medical practices imposed on intersex infants. “When we do these things, when we take the streets, reclaim the space, we set off a ripple effect,” says Pagonis. “Someone might feel isolated now, but they are tomorrow’s activist.”